A Framework for K–12 Science Education 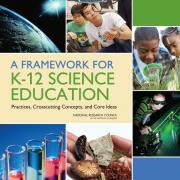 The National Research Council (NRC) of the National Academy of Sciences managed the first of two steps in the creation of the Next Generation Science Standards by developing the A Framework for K-12 Science Education, which was released July 2011.

The Framework provides a sound, evidence-based foundation for standards by drawing on current scientific research—including research on the ways students learn science effectively—and identifies the science all K–12 students should know.

To undertake this effort, the NRC convened a committee of 18 individuals who are nationally and internationally known in their respective fields. The committee included practicing scientists, including two Nobel laureates, cognitive scientists, science education researchers, and science education standards and policy experts. In addition, the NRC used four design teams to develop the Framework. These four design teams, in physical science, life science, earth/space science, and engineering, developed the Framework sections for their respective disciplinary area.

After releasing a public draft in July of 2010, the NRC reviewed comments and considered all feedback prior to releasing the final Framework. The Framework is now being used as the foundation for the Next Generation Science Standards in a collaborative, state-led process that is managed by Achieve.

A Framework for K-12 Science Education (The Framework)